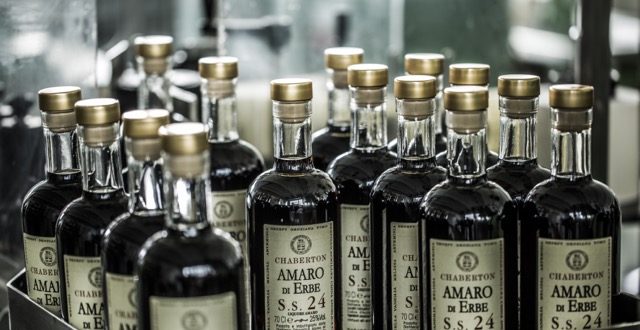 The Dealp distillery came into being in the late 1980s following the merger of four historic liqueur and spirits manufacturers, including Camoirano, established in the later 19th century and Oberto, which had been producing vermouth since the 1930s. The business originally made its name as a producer of Granger Genepy and traditional marzipan, alkermes, maraschino, arquebuse, bombardino and gianduiotto liqueurs. Collaborating with local Alpine herb growers, it subsequently created the digestifs Chaberton, S.S. 24, made with 15 herbs, and Amaro 2.0, aged in oak barriques, which have all won awards and accolades overseas. With the same herbs as S.S.24 but obviously adopting different production processes, Maurizio Zara and Alberto Fissore, both experienced distillers, also make S.S. 24 gin. The range includes an array of grappas, made from single grape varieties, aged in oak barriques and aromatized, not to mention the renowned Grappa del Nonno, produced since 1988. The latest products are Baròt, a digestif made with mature Barolo grappa and herbs, and Mielòt, made with herbs and chestnut honey. Some products are available in handy hip flasks. The honey, herbs, fruit and chocolate used to make the spirits and digestifs are sourced from local producers.